Sermons preached at Bridge Church each week are uploaded to this podcast on Sunday afternoon. Check back each week for a new message. 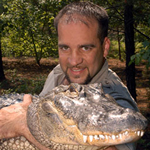 Dan began working with animals at the age of thirteen on a farm in IL. He worked with livestock such as cattle, sheep, hogs and a few horses. He is a graduate of the Moorpark College Exotic Animal Training and Management Program in Ventura, California.

Upon graduating from the Exotic Animal Program he began an apprenticeship under an ape trainer at Going Ape in Auburn, California. He maintained and cared for fourteen chimpanzees and one orangutan. During this time Dan also volunteered at a non-profit organization called Wild Things, Wildlife Assemblies. He also occasionally freelanced for Animals In Action of Los Angeles, where he gained experience with an African elephant, Bengal tiger, and pygmy hippopotamus.

Before the birth of Wild Animal Encounters, Inc. Dan worked for a short time at Silver Springs Attractions. During this short time he assisted in the catch-up and relocation of twenty-five crocodilians representing eleven species. He also worked with several species of raptors, including a bald and golden eagle.